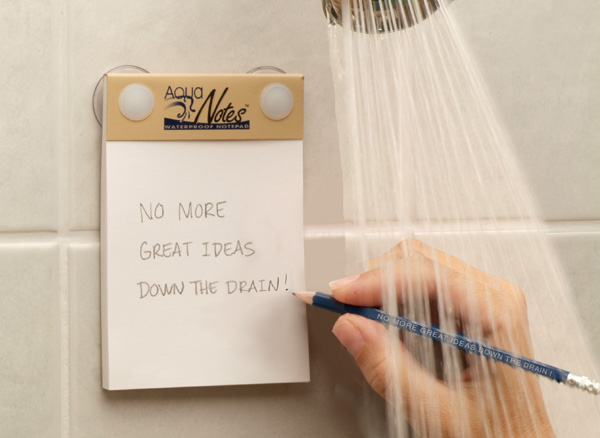 Forget whistling while you work, hit the showers! Several years ago now, I heard Tim Sanders speak on productivity and creativity. One point that stuck with me was that a chemical is released when you shower called DHEA that actually helps you think better. Haven’t some of your best ideas come while in the shower? This happens to me a lot. I often think to myself “I should capture that somehow!”

A Michigan company called AquaNotes has tried to capitalize on this concept with a water-proof notepad for those shower ideas! A little nerdy, but interesting… Rest and exercise are other great times to recharge the brain and generate good ideas. A good friend of mine keeps a notepad by his bed to capture ideas he often wakes up to in the middle of the night. Michael Hyatt and several others have argued the value of taking naps in the middle the day. I haven’t implemented this due to my tendency to take 2-hour naps vs. the recommended 20-30 minutes.

With all these great places to think, what should all that desk/cube time be used for?